A board game that I designed, researched, prototyped, and tested on my journey to UX design.

Design and build a board game that could be played virtually, but required players to  maintained a physical board in their location to keep them actively involved throughout game play.

The game needed to keep the users engaged over the course of multiple weeks. It also needed to have an appealing theme that would appeal to the users in question and be simple enough that no user felt at a significant disadvantage.

Leading with the Ending

This was my first project using any type of “photoshop” tool. I wanted to build a game that my friends and I could play over Zoom calls. When the pandemic hit we couldn’t go anywhere and I wanted something we could do that wasn’t just chit chatting every week for the hell of it. I am so proud that this came out of it, and ultimately taught me skills that I will use in my new career. 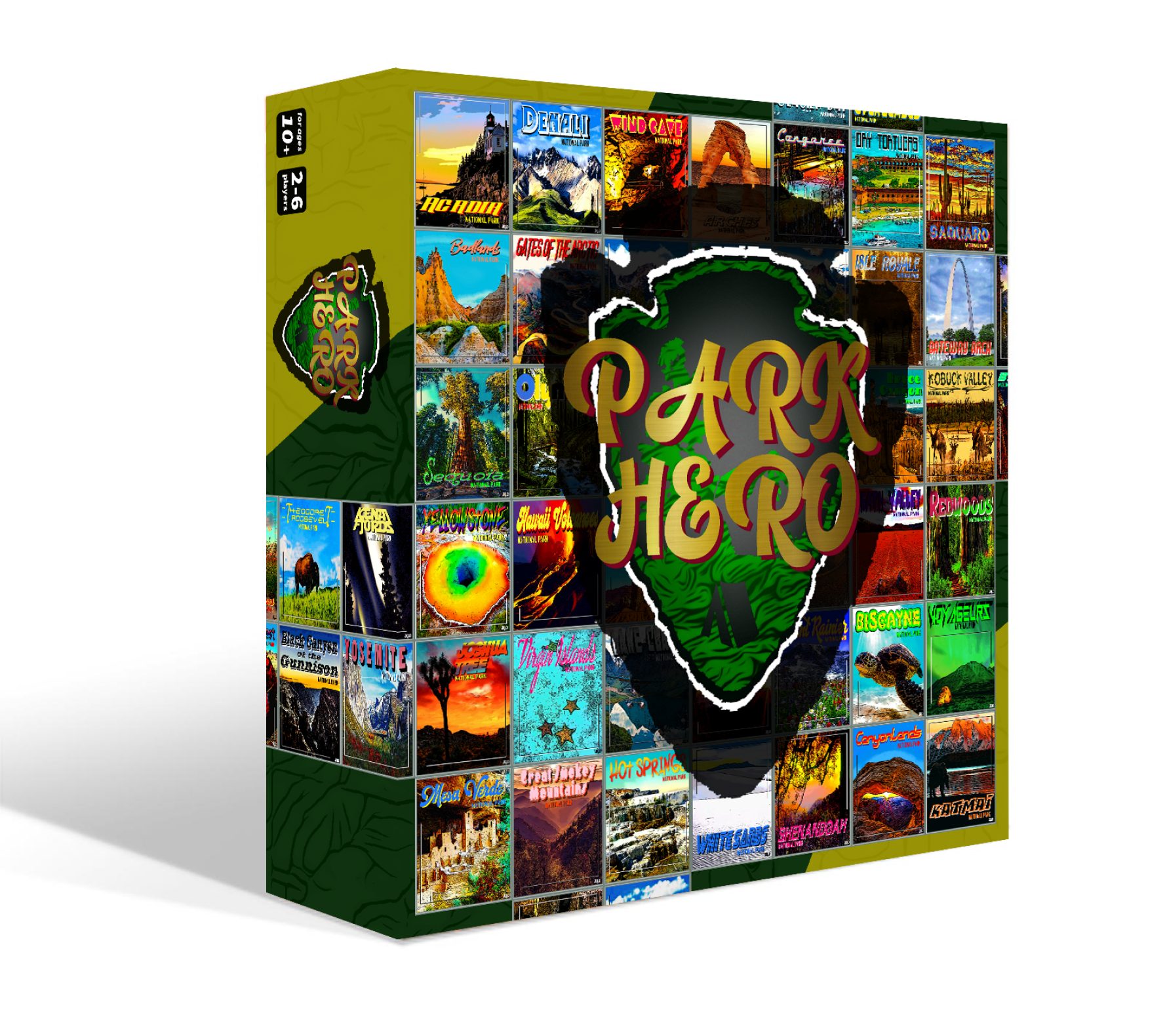 First, I have a group of four friends from high school that I have been going on a yearly camping trip with for the last twenty years. We go with our wives and children now and it’s wonderful. We collectively have a huge love of the great outdoors and national parks and have been planning our trips to see at least one new park every year. It’s a great thing to share with close friends who are practically family. We grew up together playing games like Monopoly, Risk, and others that take time and create a reason to sit around together for extended periods of time enjoying each other’s company.

Second, my job as a theatrical designer disappeared on March 12, 2020, so I have had an extreme amount of extra time on my hands. I wanted to achieve two things with this extra time. First, I wanted to learn new skills. So I thought why not teach myself photoshop, that seems useful. And second, I wanted to find something to do over Zoom calls with my camping friends. Just chatting was getting a bit old and I wanted an activity that we could do together that would take the pressure off of having to bring something to talk about weekly.

I made building this game my photoshop project. I found some artwork from the internet and created a rough board. I had all the guys print it out and tape it together and then once a week we started to play and iterate. We tossed ideas around and it grew from there. 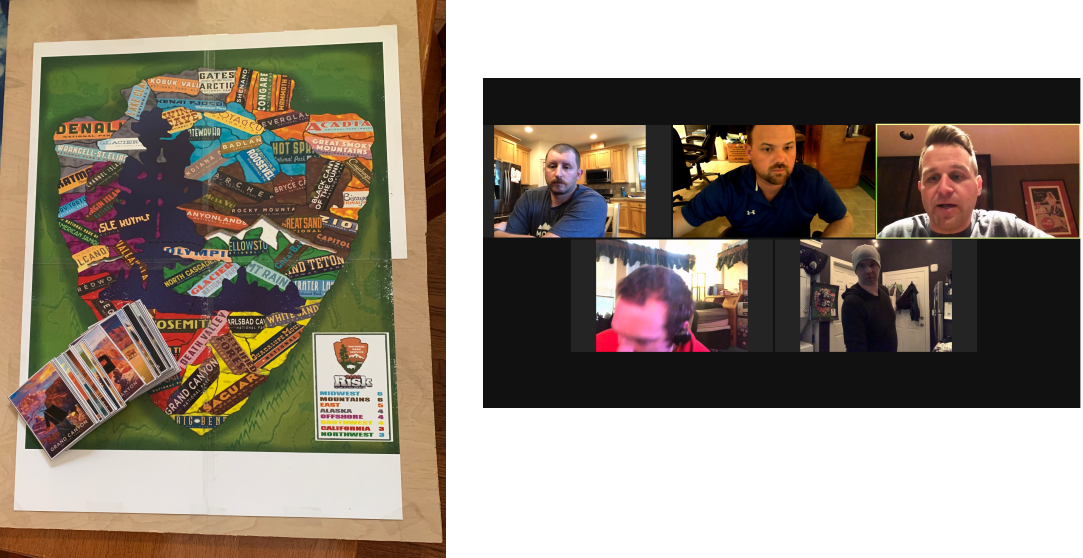 I started looking at board games that we had played in the past and enjoyed. I tried to focus on games that were strategy based and had longer game play. I knew it would be important to have a game with multiple game pieces or pawns. This would keep the players engaged on all turns. Since this was to be played virtually, I wanted to make sure the players had to pay attention to others moves and not get bored waiting for their own turn to come around.

After exploring many different games that fit the questions I had been asking, I settled on Risk as a great base model to develop the game. It was able to provide all the needed structure for the game I wanted to design.

The game would be based on US national parks, which have strong personal meanings for my group of friends, who would be the users. The parks themselves are already like territories and that blended easily into the existing structure of the game. The need for cards would provide a structure for information about each park, so the game could be a learning tool as well. The need for many pieces would keep players engaged over the course of the zoom call, and the dice rolling game play could be easily executed virtually with little dispute amongst players. 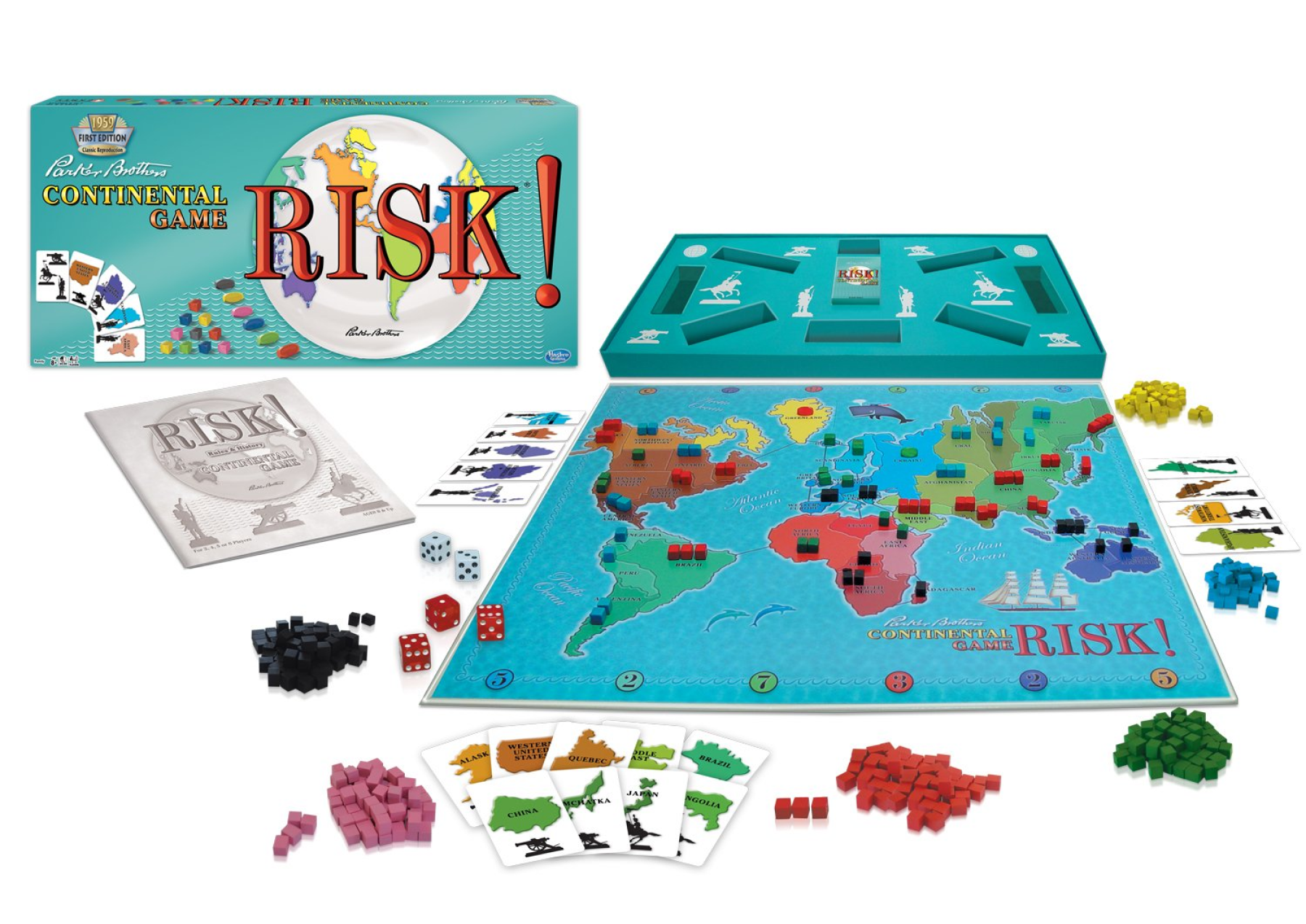 I needed to find a world map container for these parks. Using the US map seemed to be too obvious a choice and was already implemented in games like “ticket to ride.” I knew I didn’t want it to be a regular and simetrical shape like “Catan”. I felt I needed something more abstract in shape but easily reconizable as a map. I looked at other maps used in different versions of “risk.” 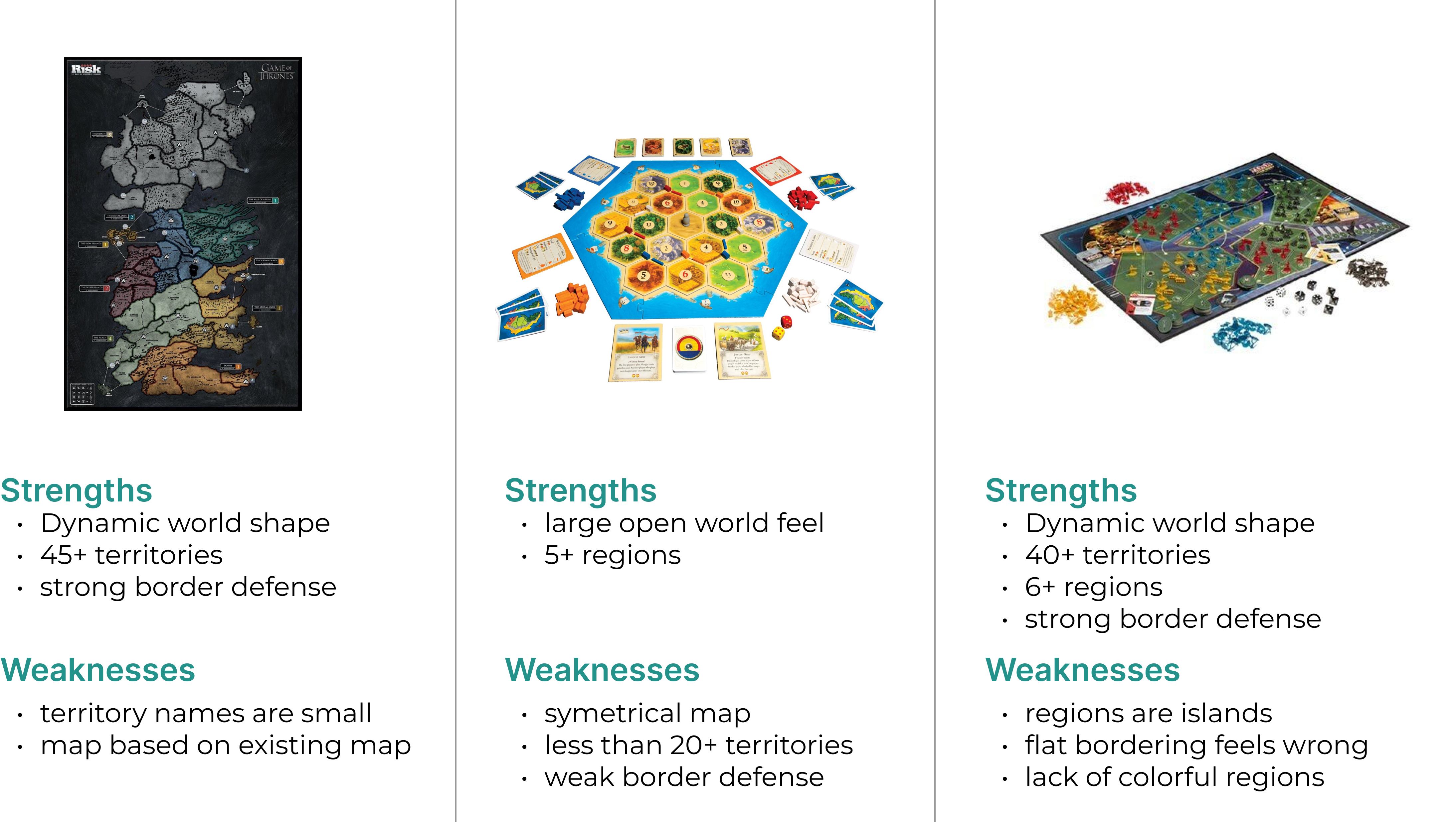 All of these maps incorporated a few elements that are important to maintain in order to have fair game play. First, all had some element of “water," or some type of uncrossable bordering device. Second, all had some type of grouping device to define regions or continents (like islands, or planets). Third, all map regions found a way to limit border protection needs so the player wouldn’t be subject to constant struggles. Finally, all had clear labels of the name of each territory and some type of color or texture device used to define regions.

I needed to find a shape that could fit those factors without being a complete abstraction.

I wanted a shape that had a connection to the parks system itself. I looked at shapes of many different items and maps looking to find the right features to meet the needs of game play. I chose the arrowhead for a few reasons:

At the time of design there were 62 national parks (now there are 63). Using the original risk game as a counting guide, I wanted a comparable amount of parks per region as Risk had countries per continent.  Risk is broken down this way:

Having roughly 40% more territories meant I needed roughly 40% more regions as well. Instead of 5 regions I was going to need 7 or 8. Risk has an average of 8 countries per region and my game would need close to the same. Using my panel of buddies as my card sorters we looked at many different options for breaking up the parks.

Grouping by locations was the decision we came to since the game board was ultimately a map. Then we needed to place the 62 parks in location by category. We decided on these categories:

Building a map for the board was difficult, but knowing the parameters for the map made it more manageable. Using the arrowhead and dividing it into 8 regions and then breaking down those regions into seven to ten smaller areas was based upon defense strategy. Trying to plan for how many borders a player would have to defend in order to maintain a region needed to be the basis for how many rangers a given region would be worth. I tried to maintain as much polarity as possible so game play would not be unfair or bias towards one strategy versus another. 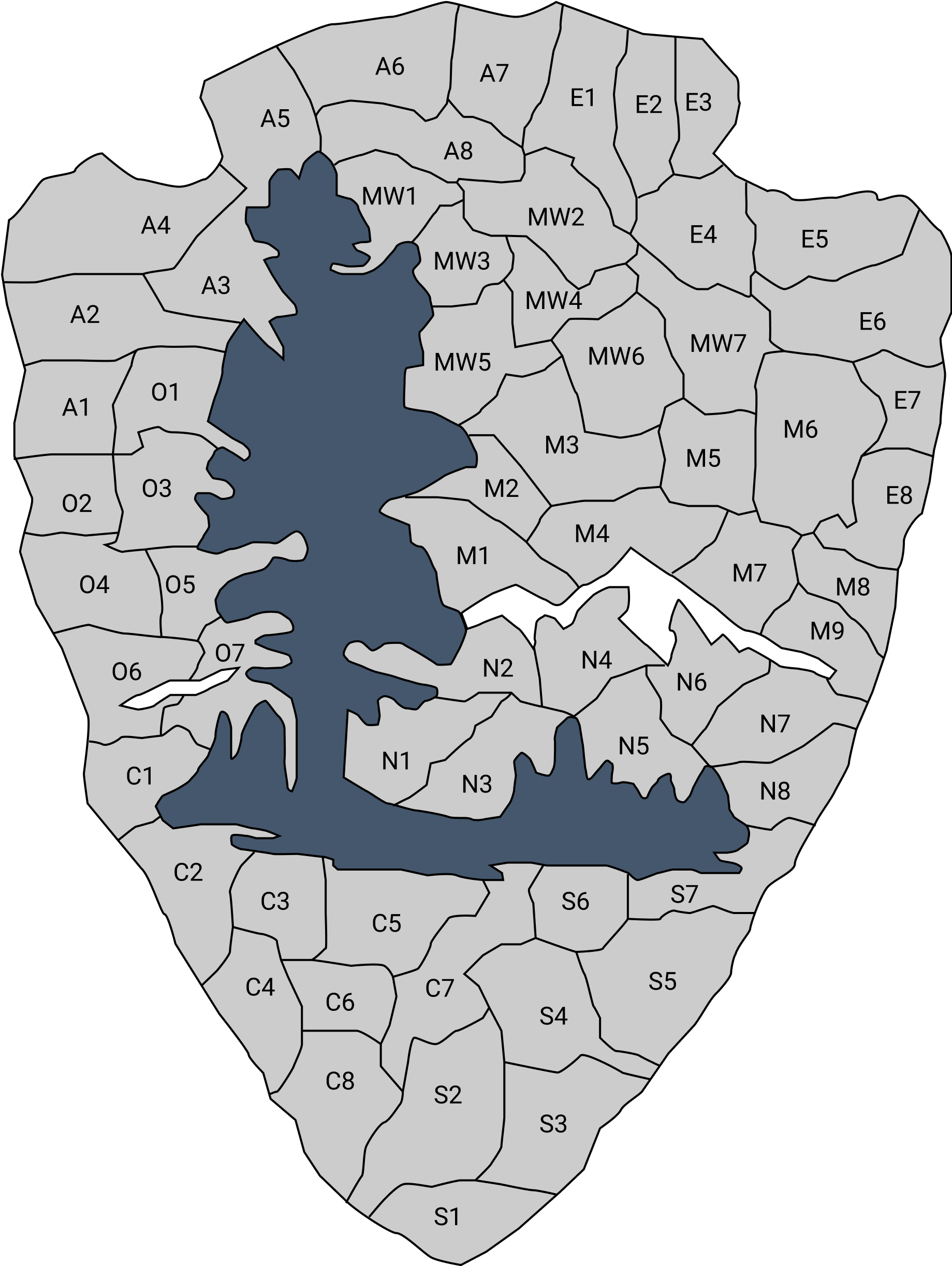 With a working prototype, user testing could commence. I asked the players to evaluate all parts of the gameplay. The primary focus was on border management and the needs for any gerrymandering. If a game was too skewed towards one skill set versus another it wouldn’t work. Did a player tend to win when implementing a similar strategy time after time? Did changing the amount of extra rangers a given region was worth increase the likelihood players would strive to maintain holding it? Other questions we found ourselves asking were:

Each time we would play I would iterate on the current version and then come back to test the newest version. This process of iterate, test, repeat helped the game play develop into the well oiled machine that we play today.

After developing the needed parts for the titles and cards I started to build the parks posters themselves. This was the huge project. I had to learn to build digital graphic images and arrange them into a cohesive set. I was inspired by comic book themes and retro 70’s/80’s artwork. Viewing what is currently available in the National Park poster market made me want to move in another direction. I wanted to be a bit more youthful, playful, and a bit less nostalgic. The cartooning of the images led me down the comic book path.  The name Park Hero was inspired by these images, combined with bold fonts, which create a super hero theme. Each time you save a park you are taking on those super hero like traits in a way. I want people to feel the parks are less like museum displays and more like the ice cave where superman goes. A place filled with magic that is real to the touch but a bit unexplainable in its daunting and magnificent beauty. 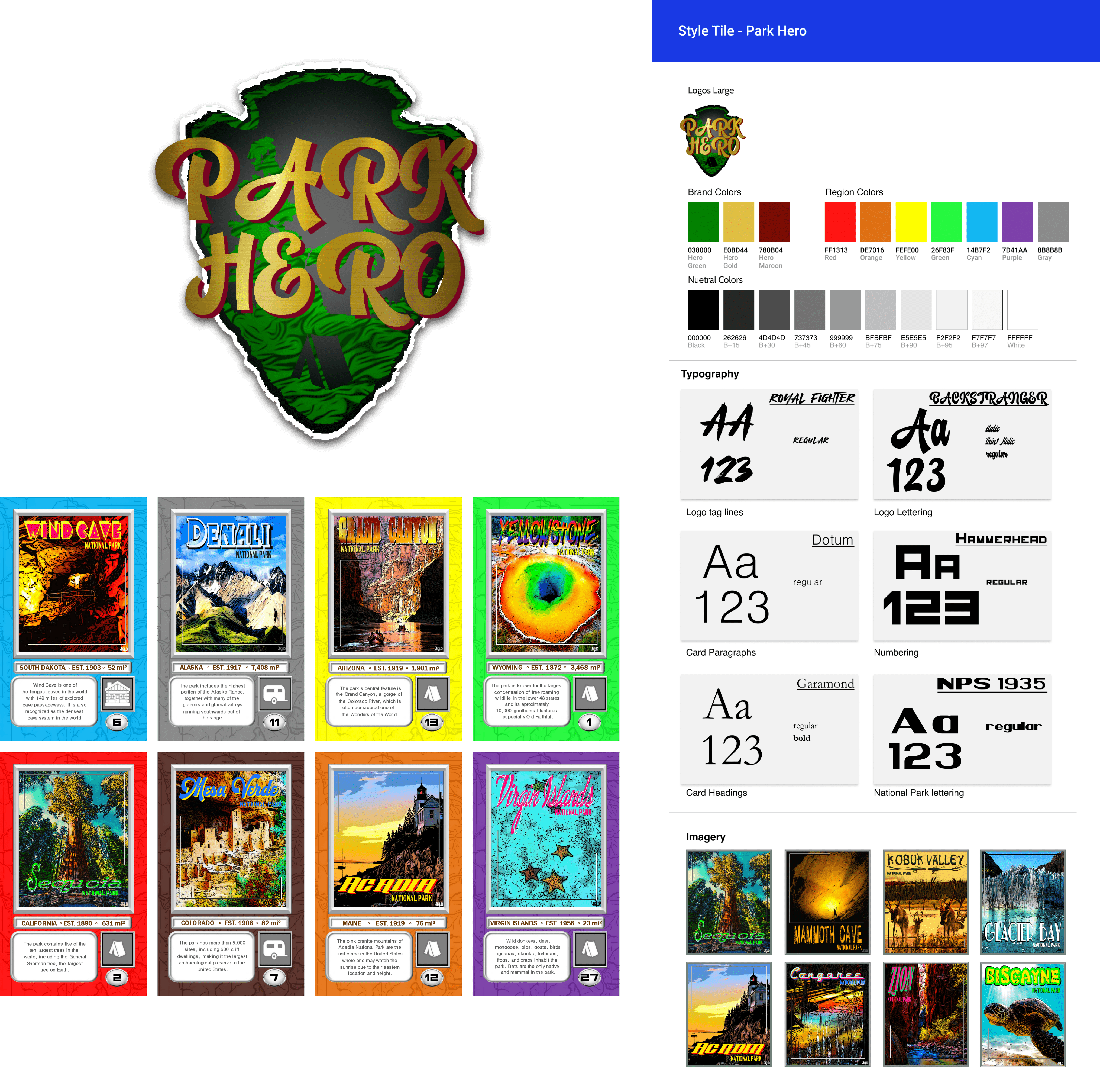 Working through gameplay I moved on to developing the artwork for each park. The game board needed eye catching, bold artwork that defined it by the parks themselves and not necessarily the overall map. I knew that the market for this game would be an audience sucked in by the national parks themselves and not necessarily by gaming. I wanted to market to campers, families and outdoor enthusiasts who had a love for national parks and wanted to learn more about them through playing this game.

Having generated all the elements needed for play and feeling confident in the testing, I wanted to learn how to sell this product myself on the open market. I found a manufacturer  who could produce all the parts needed and I had them build a demo. After iterating on that  we settled on a final design. I built a simple website using square space and learned how to connect it to a credit card account and viola I was selling my game! 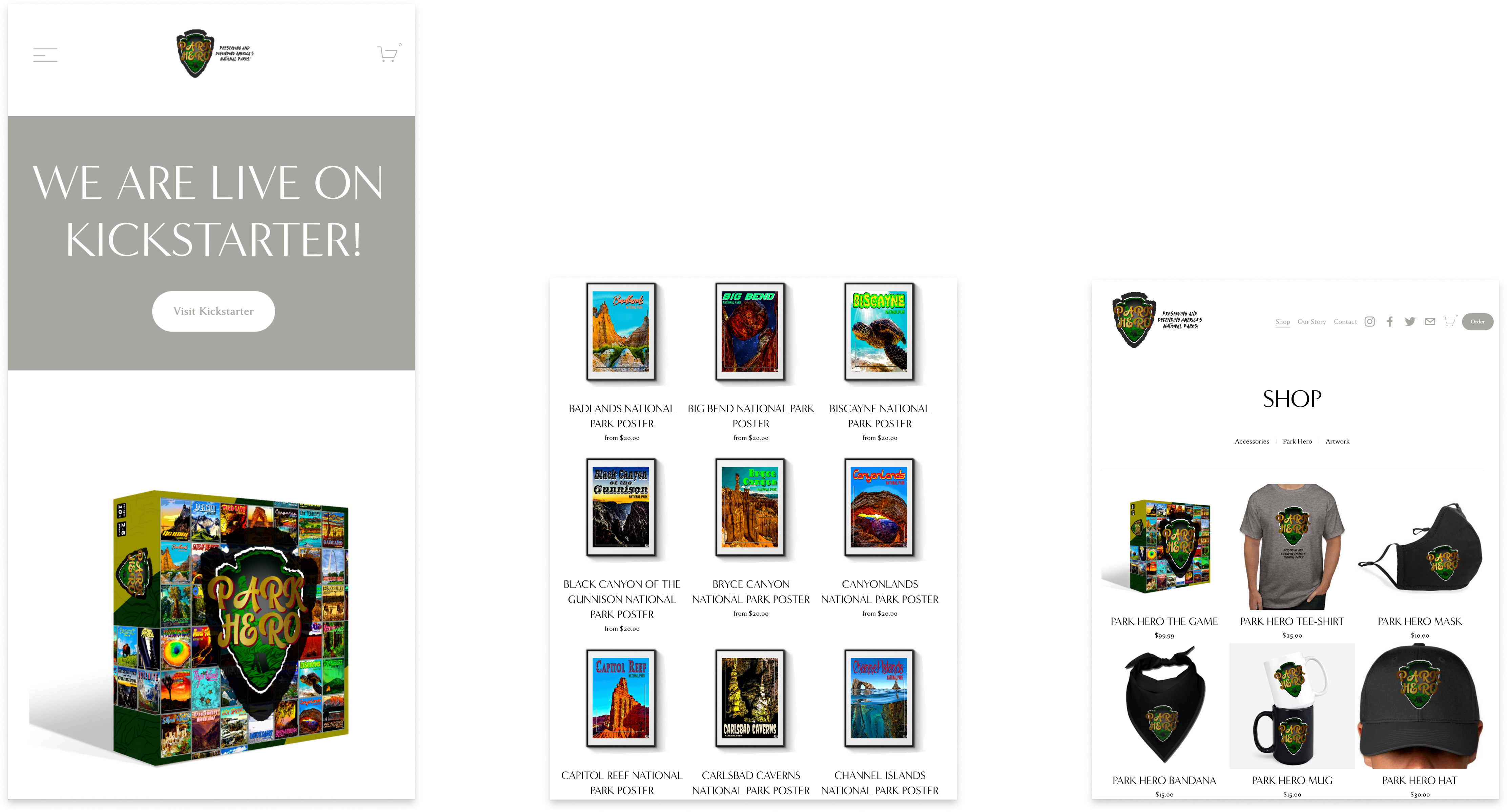 Whats in the box?

The final product is a labor of love. I am very proud of the work it took, the people who contributed to its creation and the lessons I learned along the way. Thinking back how far I have come as a UX designer since I started, I know that this is the project that jump started my career change. 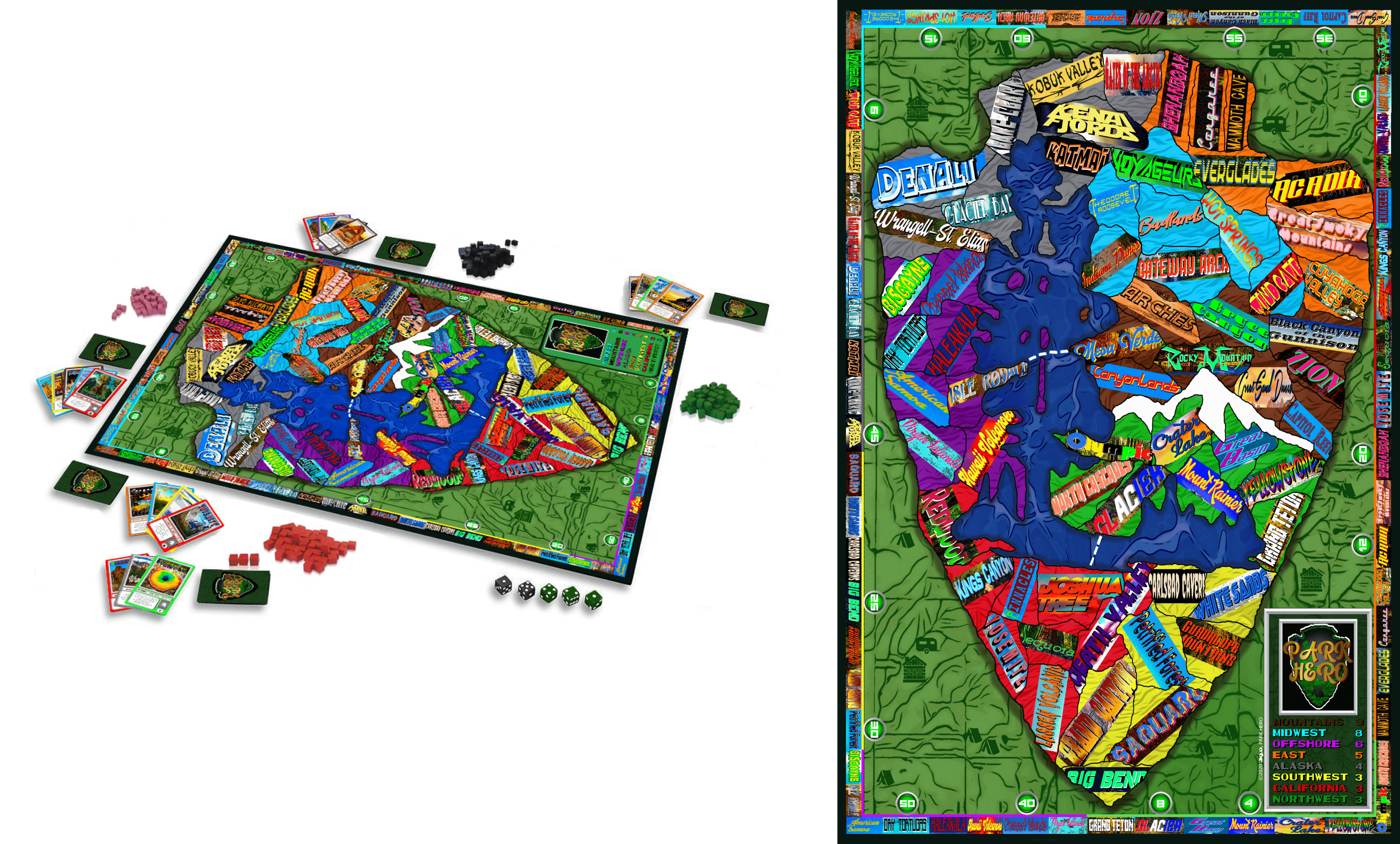 I learned so much in this process. It led me to my new career. I have built stronger bonds with my friends and found a new passion in UX and graphic design. I have a goal to set out and see all the national parks now. I’ve been to 18 so far and I can’t wait to visit the other 45! If you want to check out the game rules and maybe buy a copy yourself you can click below. I also included a link to an interview that I did with a game blogger. Thanks so much for reading all the way to the bottom. I hope to bring my passion for building new exciting things, that educate and bring people joy, to our next project together.
www.parkherogame.com
www.bert.games/post/park-hero
Next Project>