A time travel, adventure site. It's kind of like Airbnb, but with dinosaurs.

The UX and UI designer. This was my first school project. I worked on all aspects of it from research and ideation, to prototyping, branding and testing.

Create a working platform for a fictional brand featuring fictional technology within only 6 weeks by yourself. While learning the skills needed to complete the task at the same time.

This was an amazing project filled with incredible learning opportunities. I gained so much from working on this. The final design is the result of six weeks of hard work and great feedback. I’ll explain just how I got to this awesome final design in the pages below. 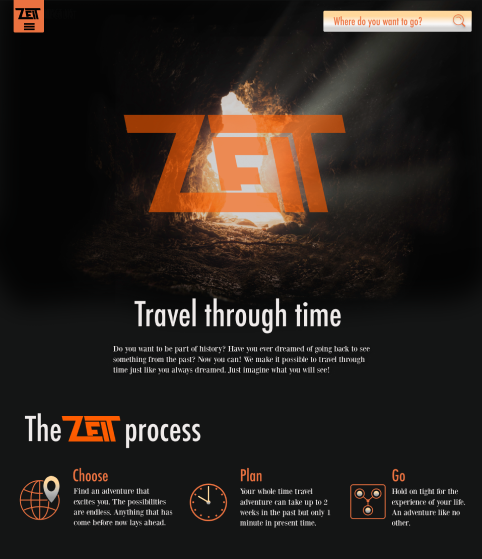 So I am in this bootcamp called design lab. I know lame, but I am having a great time. My first full fledged project comes up and they ask my to pick from one of three options. This is my own personally journey in learning, growing, and career changing so I am going to pick the most challenging one right? That’s right I am! I ain’t scared! The brief goes a bit like this: Richard Branson somehow owns a new company that can time travel. Wait did you say time travel? I’m calling Marty right now and we are getting the delorean back up and running! Anyway He needs you to help build a site that makes it so people can book trips and stuff using this awesome technology. Still interested? I was, so here we go.
Project Focus
My Role
Duration
•Research
•Ideation
•Branding
•UI design
•Researcher
•UX/ UI designer
•6 weeks

The human race has been dreaming about time travel for ages. Now it’s finally possible! Truly, these are exciting times to live in!

It hasn’t been without bumps in the road, though. While the technology has been available for over a decade, international governments blocked widespread adoption due to safety concerns. Massive conferences of philosophers, archaeologists, and high-energy physicists have gathered to raise concerns about changing the past and its possible effects on the present. They also formed committees to explore safety protocols for chrono-nautical exploration.

After years of discussions and deliberation, officials in Brussels last month announced the International Concordance on Time Travel, giving Zeit a set of standards to under which they can democratize the experience of time travel.
A total of 289 destinations all over the world, up from prehistoric times through today, have been approved and finalized to receive people any moment. These destinations are selected because of their safety: separate from critical historical turning points, and relatively isolated from populated areas. Due to the need of control, destinations are only in the past. People will travel to controlled and extremely protected places. They are similar to what we know today as resorts, albeit with organized (and secured) trips to nearby cities and attractions, where interaction with locals will be limited. However, the travelers will be able to look at, and do things typical of the time, like workshop activities or attending shows.

There are none, nobody can do this yet, but that doesn’t stop us! I had to find other similar industries that are doing similar things. So my main objective was to create an experience site that could market these amazing possible adventures so that a typical user could understand and search for them. So I started looking in the adventure/experience travel sector and used some of these competitors as a basis for what to test with potential users.

The strengths of all these were in their content and UI design. Showing people huge colorful pictures and exciting icons that got them interested in the possibilities.

These sites all made it clear that to be successful in this market you needed to let the user feel in charge. Let them search their interests. What could they offer to users to make it the most personal?

Sites that were not open and transparent, or didn’t show enough options to users of adventures that interested them tended to suffer. That seemed like an obvious place to improve on.

I found five lovely individuals and set about probing their minds for information on the subject. They were ready, willing, and able. My task was:
Objectives
•What destinations users like to travel to?
•How users prefer to book trips online?
•What are users priorities in regards to travel needs?
•What things draw users to unique places?
•Discover pain points in users current booking experience?
Methodology
•Conduct online and in person interviews one on one
•Ask questions about users methods for Locations, Choosing, and Booking methods
•Record all feedback and synthesize results to aid in developing personas
All the indivduals were a huge help and their answers brought some great insights into many things that would aide the site moving forward. Specifically in two main catagoires.
Choosing
•Users want family friendly
•Users want locations with history and culture they are interested in
•Users are drawn to places with outdoor recreation
•Users want places they have not been to previously
•Users want reviews from real people to drive their decision
Booking
•Typically start with a Google search
•Look through as many personal reviews as possible
•Tripadvisior and yelp utilized
•Price comparison shopping
Taking all this information gained from the research I built a persona that embodies the traits of many users and would be the basis for the prototypical user moving forward. May I introduce Steven! 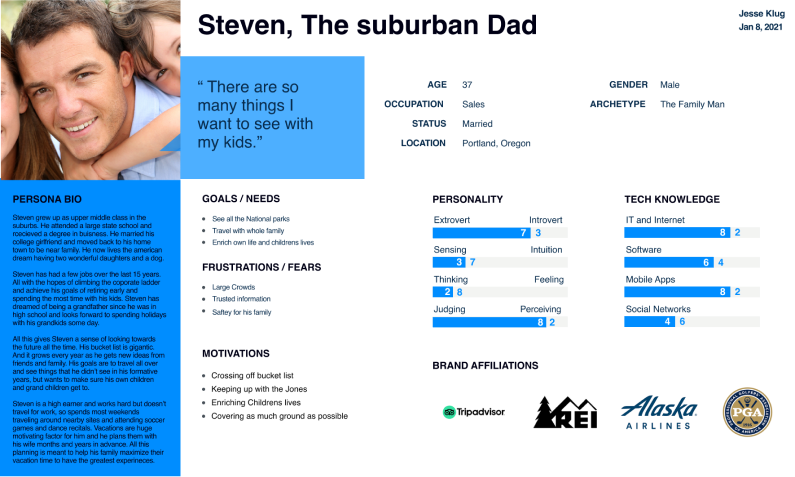 I think he also enjoys long walks on the beach and candlelit dinners at sunset (but honestly who doesn’t).

With all this knowledge and power at hand I set about mapping the course ahead. Starting with a feature map that would guide me chossing the features that the site would ultimately require in order to meet Steven’s needs. Then a card sorting exercise that synthesized a massive amount of possible adventures into some great bite sized categories. This is what would make the site manageable for the average user. Give them something to group things into so they could customize their experience. After developing a comprehensive list of categories and items I set about building a site map and mapping out potential user flows and task flows. I think this is possibly the most important part of the entire process. Breaking down the click structure of what a user will go through in order to use the site really gets you into the mind of that person. What questions do they ask? What will they want to see? When should they be presented with a call to action? This is the part of the process where you get to do your voodoo mind tricks and really get inside someones (I.E. Steven’s) head.

With this information solidified further I built a working prototype. Started with some sketching. Then from that low-fi I moved to Figma and built the wireframe. This taught me so many lessons about user flows and task structure.

Once I felt like I was in a good place with the state of my skeleton I started building some skin for it. The branding was inspired by these two photos: 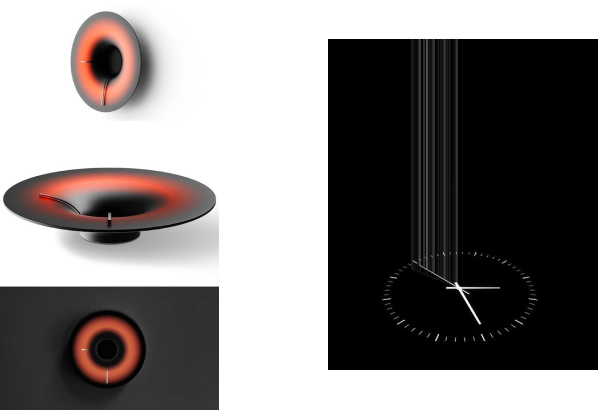 I feel they embody the feeling Steven would be looking for. They have a sleek expensive nature. Very little color, and what color there was is a bold choice of high contrast. They feel like they have a connection to time and space and have a transparent quality about them.

I felt that initially the site content was going to be based in a lot of black and white or sepia toned photography, mainly based out of a connection to the past and wanting all experiences to have a similar quality to them. I felt like I didn’t want to include star ratings or user ratings, because all of Zeit adventures would be 5 stars or 100%. But I did want Steven to feel like he could pick an adventure based on his own ratings of himself. This revelation led to the “adventure rating”. This was a number that I had seen used on other sites that gave users a taste of how “extreme” an experience might be. With that information they can make decisions based on how they feel and not how others tell them to feel. This was a way to empower them to be unique. 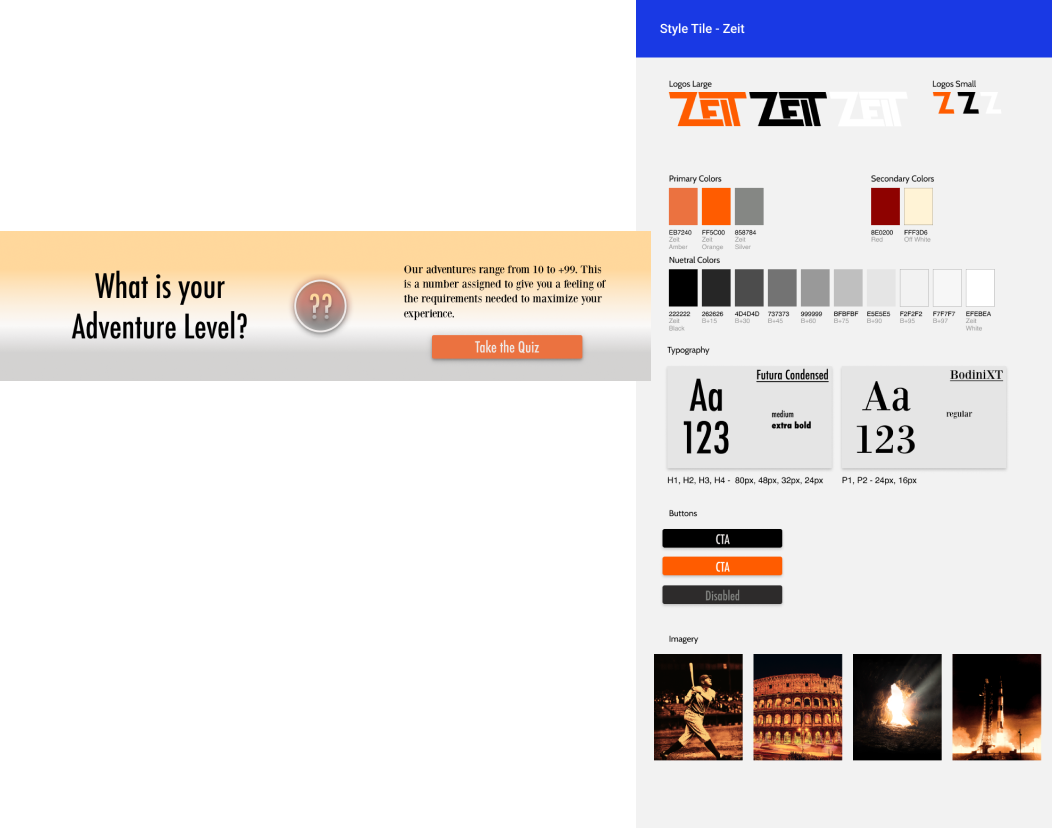 Knowing all these things made building out the high fidelity version of the site quite simple. Making color choices and choosing photos that followed this guide were all based on quality research and guidance and therefore very little guessing needing to be done.

After fully constructing a working hi-fi prototype I put it up for some usability testing. A new batch of “victims” was chosen who didn't have previous knowledge of the site and could offer qualitative feedback on its usability. I built a script and a set of objectives following two scenarios for the users to complete.
Objectives
•Observe how users accomplish given tasks
•Evaluate the navigation and flow of the site
•Expose usability issues pertaining to navigation on desktop site
•Discover duplicate navigation or unused links
•Look for dead ends and traps in user experience
•Observe legibility issues pertaining to the sites color composition 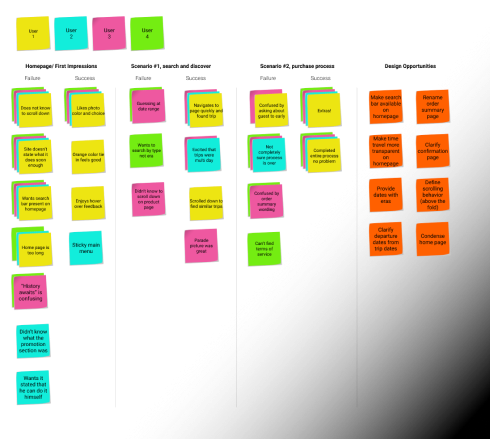 Taking the information gained from this exercise I built an affinity map of their answers to better synthesize the feedback and find the highest priorities to correct in the user experience.

From this process of research, ideation, prototype, test, iterate, test again, iterate some more, test again… you get the idea..I was able to land on this final design.

Thanks so much for reading all the way down to the bottom. I hope you liked reading about this project as much as I enjoyed doing it.
Next Project>